Charlotte Kinney Simpson, my great-great grandmother, ran a temperance hotel with her husband. When I look at this old family picture I see a conservative woman who probably worked hard her entire life. I know that she and my great-great grandfather, Hernando Cortez Simpson raised daughters who had careers outside the home—a bit unusual for the second half of the 19th century. I also wonder why the name “Hernando Cortez” was chosen by Andrew and Rebecca, his parents. Maybe one or both of them enjoyed history since they named other children Darius and Minerva. Lots of questions generated by one picture and a bit of genealogical research.

At this point, none of my younger family members are particularly interested in their roots. However, technology is allowing me to digitize family pictures and keep a record of family stories in one place. They’ll be accessible should one of my young relatives develop an interest in the future.

Here is a short video with BoomerTECH Adventures guide Chris Toy showing us how to create a home-made light box from simple materials.  This box makes it easy to digitize those family pictures stored in boxes and dusty albums, thus bringing to life the family stories and legends by putting faces to names and creating a context for the tales. 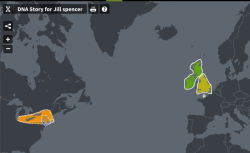 I’ve relied on Ancestry.com which receives high ratings for their extensive records and organizational format. You can develop family trees and connect to others researching the same distant relatives you are. Ancestry also conducts DNA research. There were no surprises for me in my DNA results—British Isles and northwest Europe.

Ancestry.com compiles “TruLines” for you where they connect your DNA results with people on your family tree. I find this information exciting because it gives me new avenues to research, plus generating more questions. For example, I notice that Barnabas Kinney was born in 1776–the start of American Revolution. Wouldn’t I like to have had a conversation with him about how his family felt about independence. 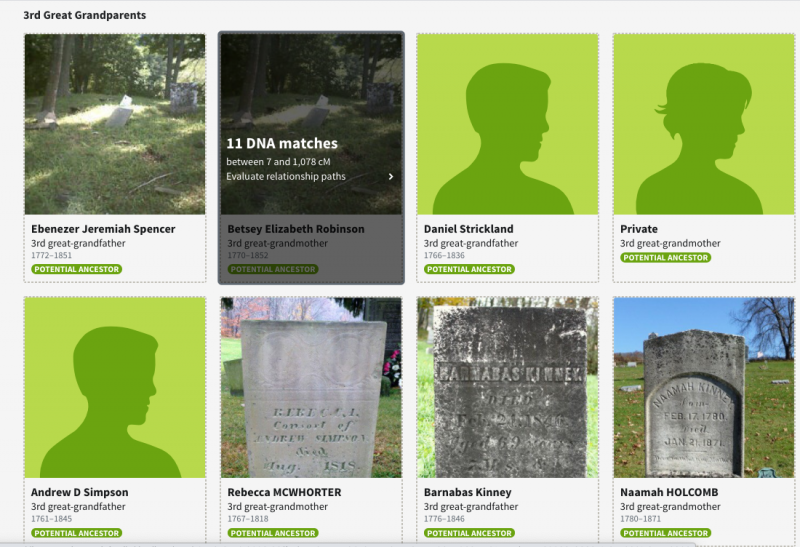 Ancestry.com has a fee structure. Of course the more you pay, the more records you can access. Find My Past is another similar resource. A free site is FamilySearch.org, a good place to start if you are just beginning to learn about genealogical research.

Here’s a quick story about how I found Scotlandspeople.gov.uk, a site that I fell in love with because there is so little family history known from my mother’s side.  I was looking through information about my maternal grandmother when I saw a family tree connection from a person whose name I did not recognize.  I looked more closely at that tree and noticed my stepmother’s name and her sister’s. What!?! I thought. Where did this information originate? I emailed the “owner” of the tree. Turned out he was the brother of a former assistant superintendent of schools in the district where I taught.  Small world!  I knew that story — her mother had been the half sister of my stepmother. You just never know where your quest for more details about family stories might lead. Anyway, it was the owner of the connected family tree that told me about the Scottish site.

Let’s get back to Scotlandspeople.gov.uk. This site is free unless you want to see a copy of the original document.  Then you have to pay a small fee. I combined the information I found on this site with a search on Google Earth Street Level and found the location of where my great-great grandparents on my mother’s side were married. 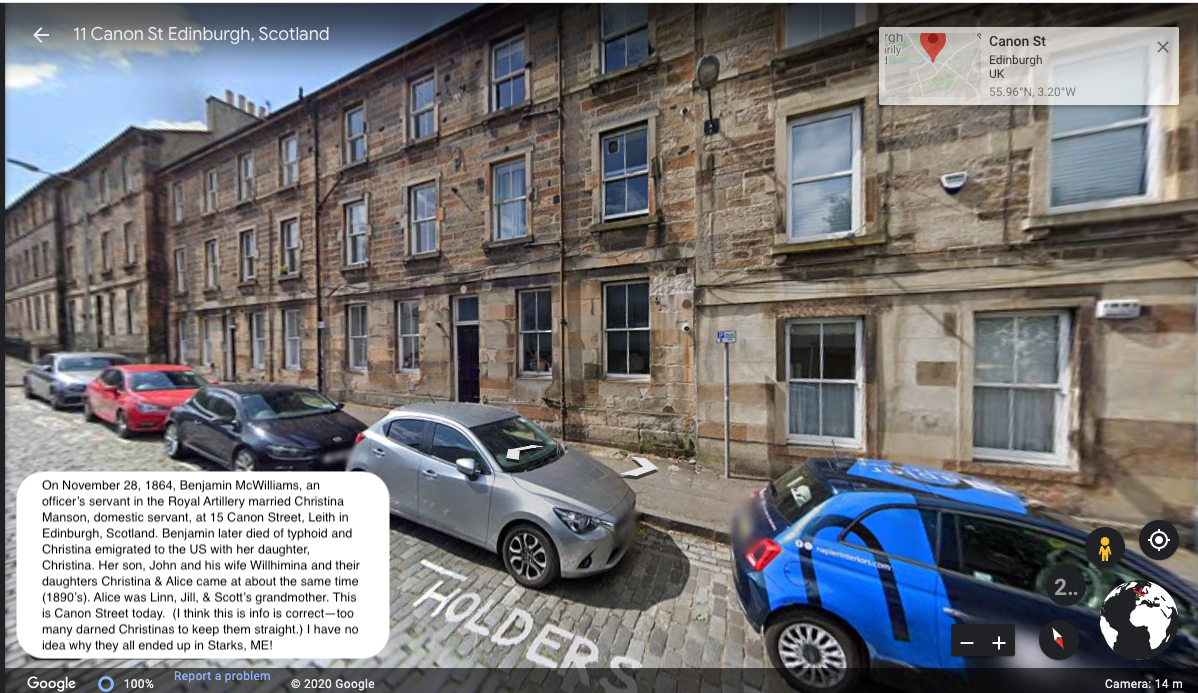 The caption reads: On November 28, 1864, Benjamin McWilliams, an officer’s servant in the Royal Artillery, married Christina Manson, domestic servant, at 15 Canon Street, Leith, Edinburgh, Scotland. Benjamin later died of typhoid and Christina emigrated to the US with her daughter Christina. Her son, John his wife Willimina and their daughters Christina & Alice came at about the same time. Alice was Linn, Jill, & Scott’s grandmother. This is Canon Street today. (I think this information is correct—too many darned Christina to keep them straight.) I have no idea how they all ended up in Starks, Maine!

This is a picture I put together for my family explaining the significance of the location. Using a variety of digital sites is like creating a jigsaw puzzle—pulling together pieces to form a more complete family history.

I was curious what resources were available beyond Ancestry.com for different nationalities.  I found a lot of my information through census documents. However, the census depends on domiciles to compile details. If your ancestor, for example, helped build the transcontinental railroad, he probably did not have a home address. Or, many immigrants did not speak English and may have lived with other folks and were never counted. So I started randomly selecting nationalities and did a Google search.  Here are some of my results: 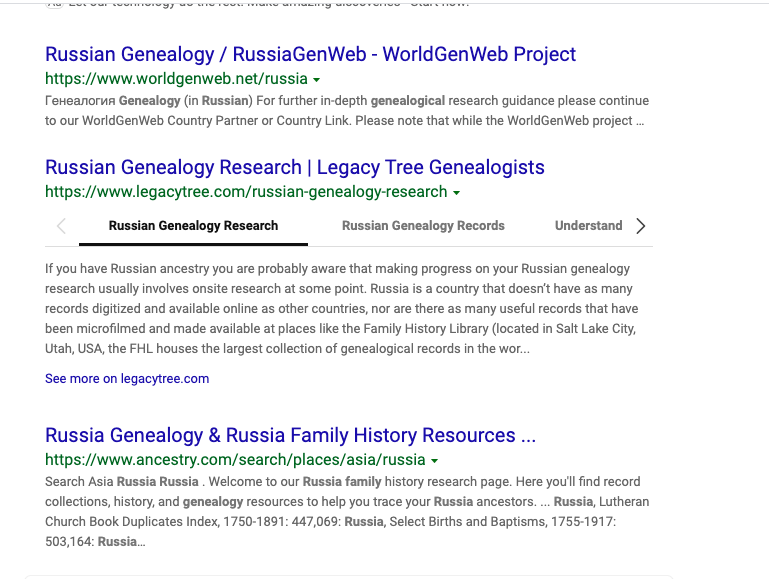 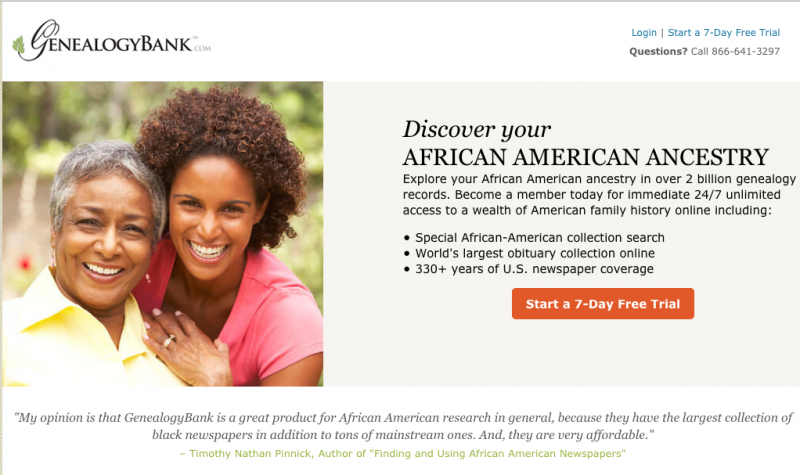 Looking for a specific nationality or ethnic group–do a Google search with the keywords of genealogy plus the nationality.

Another interesting place to check out is FindaGrave.com. This organization takes pictures of graves and offers a service of placing flowers on a loved-one’s final resting place. 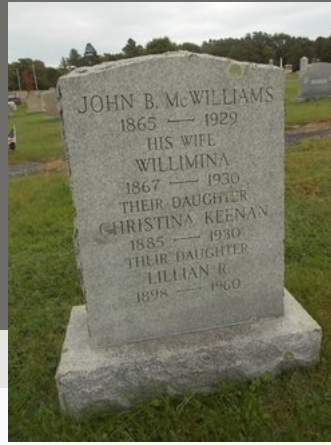 John and Willimina were my great-grandparents who emigrated from Scotland.  Another mystery for me–why are they buried in Rhode Island and not Starks, Maine where I thought they were living when they died? Off to the census records.  Turns out John had gone to Rhode Island to live with his daughter in the mid 1920’s, but Wilhimina doesn’t turn up in Rhode Island until 1929. Hmm–must be a story there.

Questions, Questions, Questions! If I were a novelist, I would create a story to explain the few facts I have unearthed. I still might (-: Family pictures and family stories are the foundation of our nation’s history. Where did the Spencers and the Kinneys stand on the issues of the day in 1776? Did the Cavanaughs leave Ireland during the potato famine and was life better in Rhode Island and Maine working in the mills? How did the McWilliams fit into a small Maine farming community where folks had lived there for generations–were they welcomed, ignored, shunned? Why did each side of the family ensure that next generation–male and female–graduate from college?

Every family has a history full of triumphs and tragedies. Photographs, family legends, genealogical research pull many of the pieces together, though often gaps remain. Sharing this information offers some young people a sense of identity, and others may come to understand the fissures that sometimes occur within a family. The digital world gives us the tools to preserve our personal history while providing a window into the many facets of our national identity. 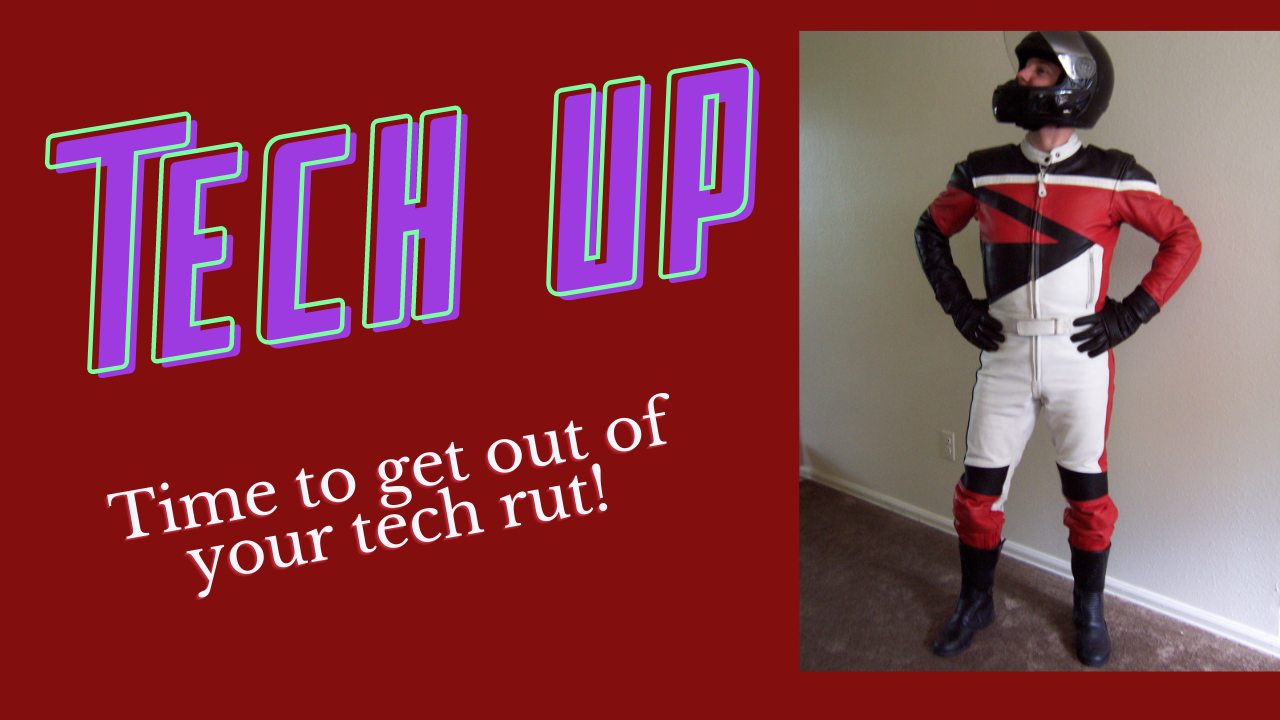 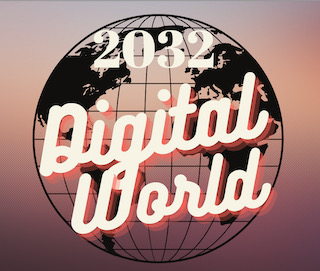